Broughton Beach is the stretch of shoreline along the Columbia River, just north of the Portland airport. It has been a popular spot to access the river to scan for waterfowl in winter, and the shore attracts some neat birds, like Horned Larks, American Pipits, and the occasional Short-eared Owl. There used to be free parking there, but that was eliminated when the adjacent public boat launch was expanded to include a nice new car parking lot (with a fee station).

There weren’t many birds on the water during my recent visit. Here is a distant Horned Grebe.

A mixed flock of gulls was loafing on a sand spit. There are at least four species in this photo, lots of California, a Mew, a Herring, and a few Ring-billed. 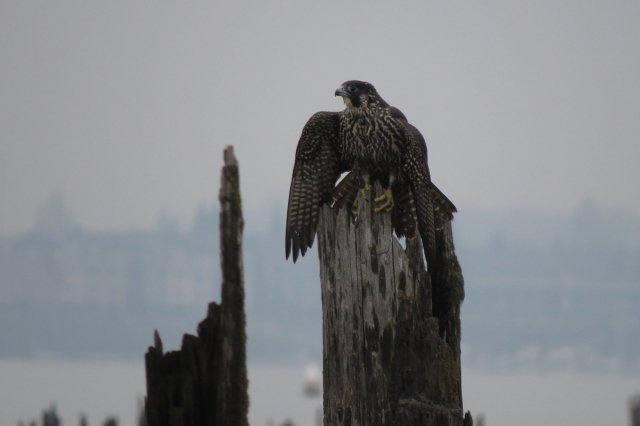 The gull flock was resting after being harassed by this guy. This Peregrine Falcon spent several minutes flying through the flock, taking half-hearted swipes at various gulls. Perhaps he was testing for any individuals that were injured or particularly slow.