While not nearly as scenic as Logan Valley, Bear Valley (Birding Oregon p. 33), west of Seneca, has its share of birds. It is the only site where birders have reported Upland Sandpipers this spring. My recent attempt to find these birds was unsuccessful, but the pastures hosted plenty of Long-billed Curlews, Willets, Wilson’s Phalaropes, and more Wislon’s Snipes than I have ever heard in one place.

As you would expect in a county that has only one stoplight, car traffic is pretty light. Traffic is delayed occasionally by herds of cattle crossing the highway. 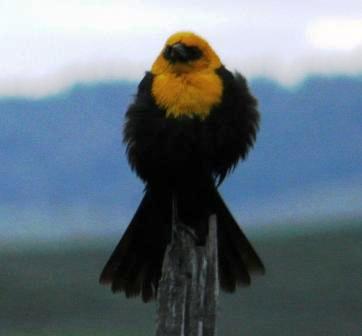 Yellow-headed Blackbird, showing off for the ladies

Mule Deer, displaying the enormous ears that give the species its name.