I spoke at the annual Birds and Blues Festival last Saturday in Pacific City, OR. Our hotel room had a lovely view of Haystack Rock. (There is another Haystack Rock at Cannon Beach, but the residents of Pacific City refer to that one as “the small one.”)

The area around Pacific City is the only winter home of the Semidi Islands Aleutian Cackling Goose. The birds spend the day grazing in short pastures, and at night roost on the ocean near Haystack Rock. In the morning, you can watch the birds take off in small flocks as they head out to feed. There is something special about being able to sit on your balcony and see every member of a distinct population of bird. But it is also very frightening to realize that one storm or one oil spill could wipe out the entire population. 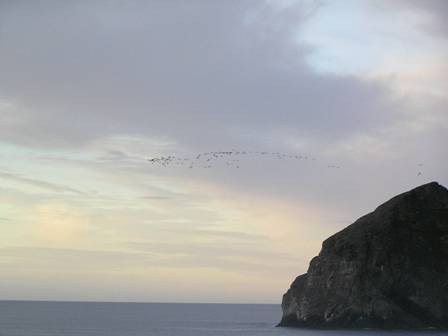 This Thayer’s Gull chose to nap in the middle of a parking lot.

This entry was posted in OR Birding Sites and tagged Cackling Goose, Thayer's Gull. Bookmark the permalink.